Sit Down Saturday with Beth Carpenter 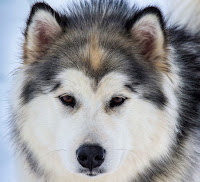 Like most malamutes and huskies, Vitus's favorite thing in the world is to pull. But Vitus has several other hobbies, including singing, sledding, and practical jokes. Below is an excerpt where Vitus indulges in two of his favorite activities.

Tanner returned the sled to the top. Vitus followed, but halfway up he took off to investigate the bushes to the edge of the slope. Tanner positioned the sled for Natalie. “Your turn.”

“Here goes.” Natalie plopped onto the sled and Tanner gave a push, launching her downward. Cool air rushed past her face and lifted her hair from her shoulders. As she reached the middle where the slope changed, a dark shape came rushing from the left and knocked her into the snow. She raised her head to see that Vitus had commandeered the sled and was surfing to the bottom of the hill, his tongue hanging out and blowing back away from his face. She laughed.

Tanner came running toward her but lost his footing on the steep slope. He fell backward and skidded the rest of the way on his back, making her laugh even more. He sat up. “Are you okay?”

Natalie was laughing too hard to catch her breath. She gave him a thumbs-up, instead. “You?” she managed to choke out.

Tanner nodded, laughing along with her. When they looked down the hill, Vitus had reached the bottom and was trotting toward them, the towrope from the wooden sled in his mouth. “Did you teach him that?” Natalie was finally able to ask.

“Not me. It must have been Dane,” Tanner answered.

When Vitus reached them, he approached Tanner and offered the rope, but when Tanner went for it, he turned his head away, keeping the rope just out of his reach. After falling for Vitus’s fake twice, Tanner grabbed the rope nearer the sled. “Drop,” he ordered. Vitus spit out the rope and opened his mouth in a doggy grin. 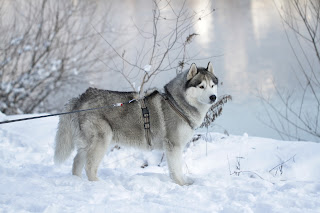 A little mix-up…
Could make her Christmas wonderful!Natalie Weiss is mortified. After mistaking handsome Tanner Rockford for his cousin, she’s followed him to rural Alaska. Now she’s stranded—until Tanner invites her to spend Christmas with his family in their rustic, cozy cabin. But in this idyllic winter wonderland, Natalie discovers the family she’s never had…and the love she never knew she needed. But what happens when they all discover why she’s really there?