Decorating for Christmas always brings back memories for me. Memories of Christmas as a child, of Christmas with my children, and family Christmas stories, like the one about my father getting a few days off unexpectedly at the end of basic training, hitching a ride home, and surprising his family. My grandmother claimed he ate an entire pineapple pie for breakfast that day. 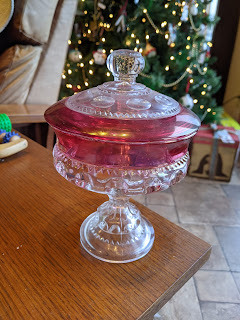 This candy dish belonged to that same grandmother. It used to sit on the coffee table in her living room room which, ironically, wasn't the room she lived in (that was the den) but was more of a formal parlor where she set up the Christmas tree. My cousin and I used to sneak in, swipe one or two of the butter mints from the candy dish, and shake our presents under the tree. I suspect the adults knew exactly what we were doing, but they let us think we were getting away with something. 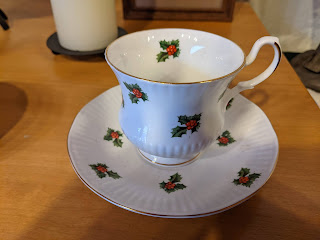 The teacup belonged to a good friend in Alaska. She married when she was eighteen, and she and her husband climbed into his two-seater plane and flew from Phoenix to Alaska to start a new life. He was an airplane mechanic who traveled the state, and so she was raising four children on her own in a rather isolated spot for a good part of the time. Her stories taught me much about courage, self-sufficiency, and gratitude for the things that make life easier. 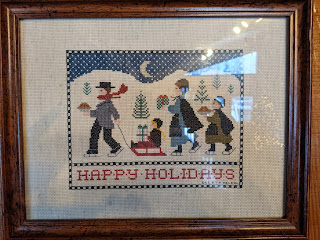 This cross-stitch is one of several made for us by my husband's grandmother. Widowed at a young age, she moved to town and supported herself and her children by working as a hospital aid. She never really took to driving, but would walk for miles up until she was nearly ninety, when a bad knee slowed her down. She lived to be a hundred.
All of these women are gone now, but they live on in a million memories from all the people they touched during their lives. Whenever I remember them, I smile. Today is Christmas Eve, and despite all the weirdness and turmoil of the year, people all over the world are making new memories that they will smile over one day. I hope that you're enjoying special memories and creating new ones as well.
Merry Christmas! 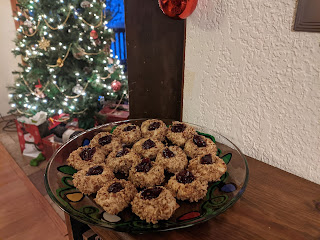 Oh, I almost forgot to mention that four Heartwarming Christmas stories are on sale right now for $1.99 in ebook. I'll link to Amazon, but they're also available from Barnes & Noble and other stores.
An Alaskan Family Christmas by Beth Carpenter
Mountain Mistletoe Christmas by Patricia Johns
The Cowboy's Holiday Bride by Cathy McDavid
Mistletoe Cowboy by Leigh Riker

A little mix-up…
Could make her Christmas wonderful!Natalie Weiss is mortified. After mistaking handsome Tanner Rockford for his cousin, she’s followed him to rural Alaska. Now she’s stranded—until Tanner invites her to spend Christmas with his family in their rustic, cozy cabin. But in this idyllic winter wonderland, Natalie discovers the family she’s never had…and the love she never knew she needed. But what happens when they all discover why she’s really there?