Sit Down Saturday with Amy Vastine

Posted by Pamela Tracy on January 18, 2014
Today we’re celebrating the January release of
THE WEATHER GIRL 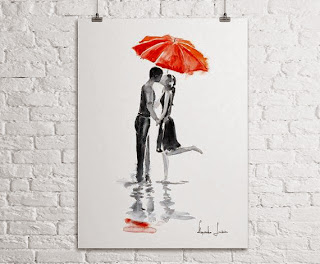 So, Amy, where did you get the idea for this novel?

A friend of mine asked me if I ever thought of writing a storm chaser story because she loves all those TV shows and even follows her local weatherman on Twitter (she gets very excited when he replies to her!) The idea sort of stuck with me. I wasn't sure I could write something action-packed like the movie Twister, but I liked the idea of someone obsessed with weather-related things like my friend.

I was standing outside of Panera Bread with my daughter, waiting for my mother, who was meeting us for a girls only lunch. My youngest son had just called me from home, already wondering when we were going to be back because he was bored. In the middle of that lovely conversation, my mom showed up and Victoria called almost simultaneously. I told my son to go bother his brother and took Victoria's call. There was some jumping up and down (much to the embarrassment of my daughter) and lots of gesturing to my mom so she knew to whom I was talking. It was pretty much the best phone call I ever received, especially because my mom was there and she has truly been my biggest supporter in all this. 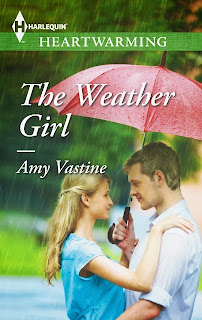 I am terrible at taglines. Terrible. Almost as terrible as I am at summaries. If I had to choose something, I do like the last line in the back of the book blurb - "Falling in love isn't nearly as easy as predicting the weather."

First manuscript - about one month. I wrote it so quickly that I wasn't too surprised when it didn't make the finals for the So You Think You Can Write I wrote it for! But when I had to revise it for the Heartwarming line and make it about 70,000 words, I had to step away from it for a little bit to really figure out how I wanted it to look and sound. So, in the end, it took me another six months or so to get it all finished.

Good question because I try not to get too attached because the scene I really, really love always seem to get cut! I do have a couple scenes I really love in this one. One is just a sweet exchange between Summer and Travis when they both know they have fallen in love but haven't shared that information with one another. They are flirtatious and happy and have no idea that something is about to happen that's going to knock them off their happy cloud. I love those kinds of moments - the calm before the storm (pun intended!) There is also a scene between Travis and Summer's grandparents that I picture in my head like a movie. They are trying to get him to see that he really does know what he wants to do with his life, but they want him to figure it out without having to flat out tell him what it is. Their frustration and his cluelessness makes me smile.

It's a tie between Big D and Mimi, Summer's grandparents. I love her grandfather's quiet, gentle demeanor. He is both wise and loving. Mimi is sort of this strange mix of my grandmothers and my husband's grandmother. She loves to tease Summer, but there isn't anything she wouldn't do for her granddaughter. Mimi and Travis have similar arcs in this story. They both love Summer but to be worthy of her love, they have to let her go.

I learned more about strange weather phenomena than I ever thought possible! Summer spouts a lot of random weather facts when she's nervous. I did learn that a dust storm is called a haboob, and I pretty much fell in love with that word because sometimes I am as mature as my 13-year-old son.

This is your first book. Exactly what does that mean to you?

Everything! I can't even put into words how amazing this experience has been. I never imagined I would be an author. Since I was young, I knew I wanted to work with kids and counsel in some way. But I have always been a daydreamer. I entertain myself with silly stories in my head. I really only started writing to make sense of some of the nonsense going on in there. When I first started writing, my husband thought I was crazy to spend all that time on something I wasn't going to let anyone else see. So, I decided to find out if anyone found what I wrote as interesting as I did. Luckily, they did!

I am working on a three book series featuring three sisters. Each sister gets her own love story. I don't know how much to say, but I plan to tug on lots of heartstrings and all three books may require a tissue warning. The first one is tentatively titled, THE BETTER MAN, and centers on a young widow and her son, who happens to be a selective mute since his father passed away. As a social worker in my other life, I have seen the struggles both parent and child go through when there is an anxiety disorder such as this one. I can't wait to get them all written and out there for public consumption!

I am halfway done with fellow Heartwarming debut author, Rula Sinara's THE PROMISE OF RAIN. The best thing about being a part of the Heartwarming group is discovering all these wonderful stories! This is the third Heartwarming novel I've read and I love it.