So, Marion, where did you get the idea for this novel? It's an idea I've had for years - a woman dealing with everyone in her family wanting to know when it would be her turn to get married. 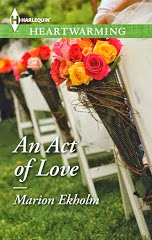 In looking at the cover, if you could add a caption or captions, what would they say? My cover speaks for itself. Not only is a wedding about to take place, it's in a beautiful outdoor setting. I love it.

How long did it take you to write? I started this story a long time ago with the intention of having my heroine, Marley, getting back together with Richard, the man she was in love with when she attended college. After about seven chapters into the story I had to stop. Brant indicated he'd make a better hero than Richard and my affection had shifted to Brant. I put the story aside for several more years before I could figure out how to make Marley fall for Brant. Something happened I hadn’t expected: a rivalry developed between Brant and Richard for Marley's affection.Thank goodness Marley decided she wanted Brant by the end of the book.

What is your favorite scene? It's a tossup between Brant's demonstration of how he kisses actresses, his girlfriends and his wife versus Marley's four-year-old niece helping him propose marriage.

Who was your favorite character and why? Brant! I loved how his face lit up with a smile whenever he dealt with Marley.

If you could pick fictional characters to play the hero and heroine, who would they be? Patrick Demsey as Brant and Jennifer Garner as Marley (with long red hair).

Tell us one thing you learned during research. Research is best when it’s fun. I had so much enjoyment learning about music and how to play the guitar, all things that helped develop Marley’s character.

What music would match the mood of this novel? Marley played the guitar and the music I enjoyed while working on this came from Bud Dashiell and Travis Edmonson, two folk singers who also played guitars. I loved their harmony.

This is your 2nd book. Exactly what does that mean to you? It’s a delight to know my second isn’t a stepchild but one as good as my first.

What do you plan to work on next? Today I’m working on a series of several books that take place in the Deer Valley Community College, based on the college where I work.

What are you reading for pleasure right now? I’m catching up on the Heartwarming books I received at the RWA conference.