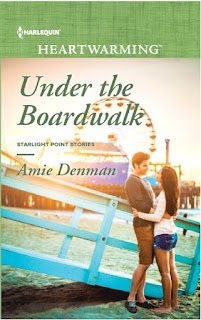 Today we’re celebrating the release of Under the Boardwalk.

So, Amie Denman, where did you get the idea for this novel?
Hello! Thanks for asking me about the first book in Starlight Point Stories. This series is close to my heart because the idea came from a happy chapter of my life. During my college years, I worked at a summer resort and amusement park just like the one in Under the Boardwalk. I also fell in love there with the man I'm still married to 23 years later!

In looking at the cover, if you could add a caption or captions, what would they say?
Amusement park owner Jack Hamilton and sweet baker Augusta Murphy take a walk on the beach and forget they're on opposite sides of a fight.

How long did it take you to write?
Good question...I wrote and re-wrote this book until I finally got it right. After thinking about the idea for years and revising it for years...I think I may have 4 years invested in it. And I don't regret a single moment!

What is your favorite scene?
My favorite scene is when Jack takes Augusta out on his boat The Starlight. She finally discovers what's going on in his heart and mind.

Who was your favorite character and why?
I love both Augusta and Jack. But if I could only be one of them in real life, I'd be Augusta. I love cake, and she makes gorgeous wedding cakes!

If you could pick fictional characters to play the hero and heroine, who would they be?
Julia Roberts would play Augusta and Colin Firth would play Jack. Swoon!

What music would match the mood of this novel?
I hear "Under the Boardwalk" when I think of this book! "From the park you hear happy sounds from the carousel..." I also hear "Verdi Cries" by 10,000 Maniacs. It evokes a summer resort by the sea.

This is your 7th book. Exactly what does that mean to you?
I'm really proud of the books I've written in the past, but this is a whole new beginning for me. The next two Starlight Point Stories books will release in August and November of this year, and I am thrilled! It's so lovely to write for Harlequin, and my editor Dana has pushed me to be the best writer I can be.

What do you plan to work on next?
I'm working on the rest of the Starlight Point Stories series (there may be a 4th!), but I also have another series I'm just beginning. It involves my favorite obsession: firefighters.

What are you reading for pleasure right now?
I just finished Elizabeth Heiter's Seized and I loved it! I also love to read and re-read anything by Kristan Higgins.

Thanks for joining us, Amie!
Thank you! I hope readers will visit me at www.amiedenman.com

Would you like a chance to win Under the Boardwalk or the three other January releases from Harlequin?

Our January Harlequin Heartwarming releases are the first to be available in print format through Amazon and Barnes & Noble, and we have a special giveaway for you.

Each of us—the four authors with January releases—is giving away five books. Yes, this means twenty books to be given away in total. And your odds of winning are one in 500!

It’s simple to enter. All you have to do is click on the book titles below, follow us on Amazon, and you will know right away if you’re a winner. There’s no waiting! If you win, the book will be on its way to you direct from Amazon.

Under the Boardwalk by Amie Denman;
A Boy to Remember by Cynthia Thomason;
The Missing Twin by Pamela Tracy;
When Love Matters Most by Kate James


Since ALL Harlequin series titles are now available in both print and ebook format, Harlequin also has a giveaway right now. Find out more here.