It's a Dog's Life, Part 2, by Kate James (and contributed to by Harley and Logan) 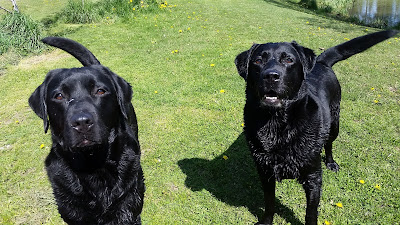 Some of you who have been following our blog for some time might remember my post from September 2014, in which I introduced Harley and Logan, and explained how they came to be members of our family. If you'd like to refresh your memory, you can find that post here.

As a quick recap, they came into our lives unplanned. They were fourteen and sixteen months respectively when we first met them, intelligent and with great temperaments. Although they were never abused, their behaviors were greatly influenced by having spent their "childhood" exclusively in kennels.

Two years after that post and over three years after Harley and Logan adopted us, I thought I'd give you an update on how we're doing.


I never crated a dog before, but Harley and Logan needed the comfort and security, as that's all they'd known before us. I had hoped that in six months to a year, the crates could go. Over a year later, when I wrote the last post, they still loved to spend time in their kennels, but preferred to curl up, or stretch out, together in one kennel. 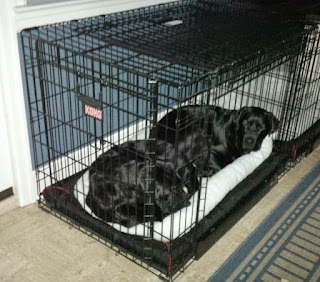 
Some things haven't changed. We still haven't been able to remove the crates from the breezeway, despite having luxury dog beds throughout the house. 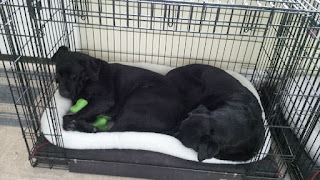 It's their happy, "safe" place. And they still prefer to share a single kennel. What has changed is that Logan occasionally likes to redecorate...or perhaps let us know that the top beds need to be washed! 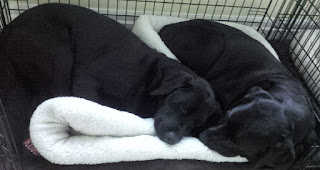 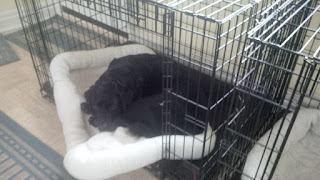 For the above picture, he decided to pull the bed out while Harley was still in it! 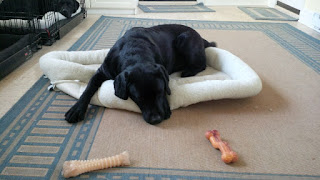 Logan was generally quite good outside. Harley was the challenge. He'd see a butterfly, a little switch would go off in his head and the rest of the world would cease to exist as he chased it. We had to fence our property to keep him from running over the back into the valley, where there is a steep incline. He stayed safe, but our gardens suffered.


Logan is still (mostly) an angel. Harley still has his obsession with butterflies. But now he'll also cry like a baby, in addition to dancing around in hot pursuit. (If you heard him, you might call the humane society on us, thinking we're hurting him!). The good news is that he is starting to listen (a little) when we call him. Also on the plus side, our front gardens (although spent this late in the season) are in tact. 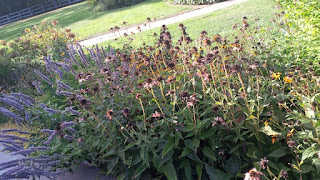 Well, mostly . . . other than that itsy bitsy spot (center, below) where he hopped right in. 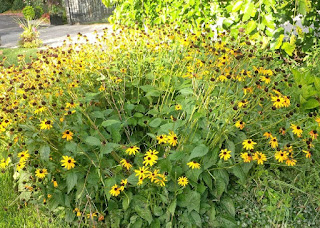 
Despite not having met until they were fourteen- and sixteen-months old respectively, they established a close bond very quickly. They would routinely lie on top of each other, snuggle and seek out the sun. On the negative side, Logan used to get up on furniture. 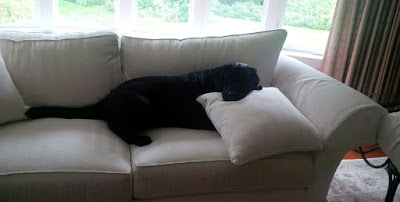 Cute as he was, the black dog on the white couch thing didn't find favor with us.

Also, because they didn't really have toys to play with as pups, anything on the floor was fair game to be swallowed. Finally, Logan thought he was a lap dog, and on one occasion when he tried to climb into my lap while I was writing, his tooth happened to connect with (and destroy) my laptop screen. 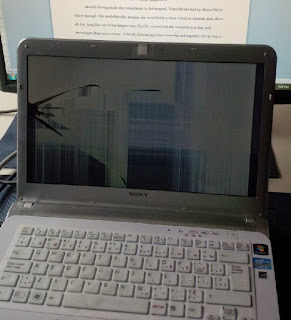 Logan no longer tries to get up on furniture. They still like to sleep together and snuggle. 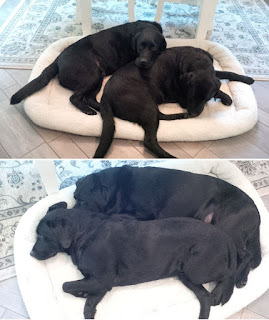 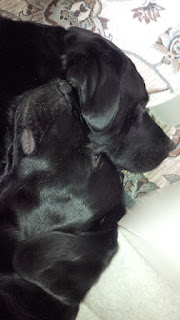 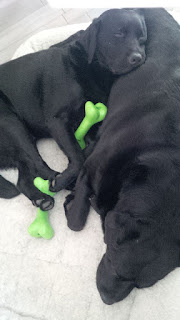 They still like to seek out those little slivers of sunshine. 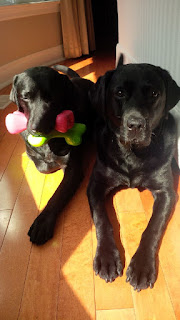 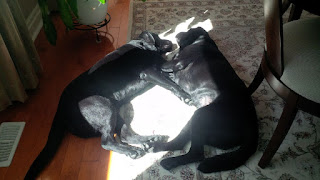 And, yes, they occasionally still like to swallow things they find on the floor (or sneak out of a laundry basket). When one of my new RWA 2016 Harlequin socks went missing, I had no idea which dog had swallowed it, thus a trip to the vet didn't make sense. They were both eating and pooping normally, so there was no clue in that regard. Of course, despite our vet's assurances, I was worried about them. Finally, FOUR WEEKS after the sock went missing, Harley decided to return it . . . on its own, without his dinner. Harley is, thankfully, perfectly fine; the sock (even after washing) not so much! 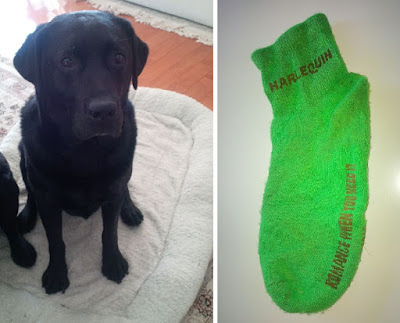 Finally, Logan still likes to think of himself as a lap dog, but fortunately no laptop screens have suffered the consequences. 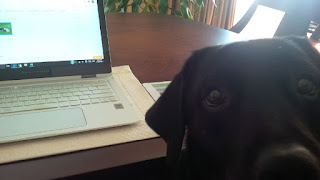 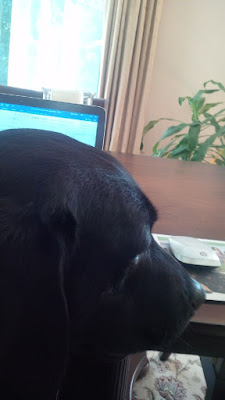 Although Harley and Logan have come so far in the time they've been with us, yes, they still have a few idiosyncrasies due to how they lived their formative years. The constant is that they continue to delight us each and every day, and the unconditional love and affection they bring into our lives is limitless and unparalleled. Idiosyncrasies and all, we wouldn't trade them for the world!

Do your pets have any particular idiosyncrasies that make life . . . interesting . . . for you? Of the people leaving a comment, one person will be selected at random to receive a signed copy of The Truth About Hope.

The winners are: I decided to pick two winners instead of just one. Pam and Sandra, you both win a signed copy of THE TRUTH ABOUT HOPE! I hope you will enjoy the book! 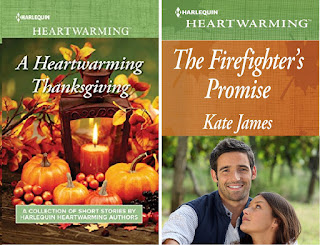 Watch for our upcoming reader events, including an exciting pre-order giveaway that we'll kick off right here on October 1st!

The first book in my new Sanctuary Cove series, scheduled to release March 1, 2017, is now available for preorder, as well. You can order it here.