Sit Down Saturday with Janice Carter

Congratulations on your debut Heartwarming, Janice!

Thank you.  It's been an exciting year since I got the call in June 2016.  This is my first Heartwarming and my 12th Harlequin.  My first, an Intrigue, was published many years ago and was followed by 10 Superromances.  I love the Heartwarming line and have been warmly welcomed by the authors of this series!

What is your book about and where did you get the idea for it?

The idea evolved after I read a magazine article about an American soldier in Afghanistan who'd befriended a stray dog while the soldier's unit was in the mountains.  When they returned to base miles away, the dog followed the unit.  Touched by the animal's determination to be with him, the soldier requested and received permission to take the dog back to the States.  I wanted to explore this unique connection between humans and animals - especially dogs - to show how that bond can have a healing effect.  Here's a peek at the back cover.
Army captain Luca Rossi hasn't forgotten the dog who saved his life in Afghanistan.  He just didn't expect to be reunited with him on an Ohio soybean farm. Kai Westfield, the photojournalist who agreed to transport Amigo back to the States, has a different future in mind for the mutt that's bringing her orphaned nephew out of his grief. This tranquil, beautiful place is also healing the wounded soldier....and Kai deserves credit, too.  But she's only holding down the fort here until her dad recovers his good health; she can't wait to get back to the big city.  Can Luca summon the strength to stop Kai - and the peaceful life he envisions with her - from slipping away for good?

What research did you do while writing For Love of a Dog and why Lima, Ohio?

I have to thank Google search, YouTube, family and friends for much of my research!  I wanted to set the book on a farm close to a large town not too far west, to highlight the aspects of city versus country as one of the areas of conflict between Kai - who eagerly escaped the confines of family and  rural life - and Luca, who sees the country as a place to become whole again.
My brother lives in soybean country and provided information about sowing and harvesting. Also, there's a vet in my family who described how Amigo's injuries would be treated.
As to Lima?  It's a mid-sized city - or town - in the agricultural heartland of Ohio and seemed to be the perfect locale.  Plus, it was the fictional setting for one of my favorite TV shows - Glee.
And years ago my husband and I backpacked overland to Australia, travelling through Afghanistan long before occupations and wars fractured that country.  It was an indelible experience and allowed me to picture the scene where Luca's unit was shattered by an IED.
Essentially all of our life experiences and adventures are fodder for research, aren't they?

Indeed.  So what issues or themes are you exploring in For Love of a Dog?

The three main characters - Kai, her young nephew Thomas, and Luca - carry the weight of guilt and remorse over events that were beyond their control.  These emotions influenced their decisions and actions, threatening to jeopardize their chances at finding peace of mind and leading a healthy, 'normal' life.  The secondary characters - Margaret and Harry, Kai's parents and Isabel, Luca's mother - also deal with the hard, even cruel, cards that life has handed them. What sets all these characters on the healing path is their love of a dog - Amigo.

What is your favorite scene and why?

Of course I have many favorite scenes, but the one I've chosen today shows the shift in the relationship between Luca and 8 year old Thomas, an elective mute since his father's death. Luca has been helping Kai on the family farm and staying in the bungalow where Thomas once lived with his parents.  The scene comes at the end of Thomas's first walk-through in the bungalow since his father died. As Thomas sits at the kitchen table with Luca, the impact of his loss hits him once again. Luca, no stranger to grief, senses what the boy is going through.
As Thomas sipped his drink, his study of the room drifted gradually to the contents of his glass. Luca took in the bowed head and slumped shoulders, and figured it was time to go.
"Don't know about you, but I think it'll be cooler outside under that tree. Amigo is probably still there, waiting for us.  Shall we join him?"  He pushed his chair back and picked up his glass.
Of course there was no response.  The boy didn't even raise his head. Luca started for the door and part way there, he heard a soft footfall behind him. As he'd predicted, Amigo was still sleeping beneath the bench.  Luca strolled over and sat down, taking in the green expanse of lawn stretching out to the highway, the rows of fir trees lining the drive and the cultivated fields rolling as far as the horizon.  It was a clear, blue-skied day speckled with dabs of clouds, and he was suddenly filled with promise.
Thomas brushed against him as he sat down.  Luca didn't look his way, just sighed and said, "This place is beautiful."
The tinkle of ice as Thomas drank was the only reply, but sitting next to the boy, Luca felt Thomas had taken another step toward accepting him.  He didn't know why, but that was important.  He finished his soda, enjoying it to the last drop.

What's next for you, Janice?

I'm working on more stories set in Lima, bringing in some characters from For Love of a Dog as well as new ones.
Thanks for dropping by today!  Feel free to contact me at:  janicecarterbooks@gmail.com 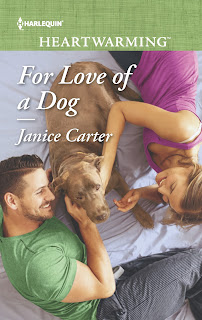 For Love of a Dog is available at:
www.Amazon.com ; www.Goodreads.com ;www.barnesandnoble.com ;iTunes ;www.harlequin.com
Indigo and other online book stores in both print and digital formats.

Be sure to check out the other September releases:  Deal of a Lifetime by T.R.McClure;  A Father's Pledge by Eleanor Jones and  Soldier's Rescue by Betina Krahn.