Books to Movies by LeAnne Bristow

Posted by LeAnne Bristow on March 08, 2018
Hey! Have you heard the news? Our own Catherine Lanigan has a movie coming out on March 17th! To say this exciting is an understatement! And the fact that the movie is based on her Heartwarming book makes it even more exciting! I know we will all be tuned to the Hallmark Channel on March 17th. And today, she's making a special appearance on Hallmark's Home and Family Show at 10 am eastern time. I've already got my DVR set to record! 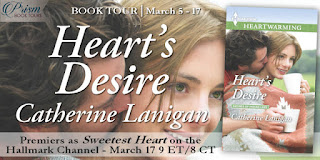 All the excitement got me thinking about books that have been made into movies. Some have been huge hits, such as Harry Potter or Twilight. Others didn't seem to be able to bring the books magic to the screen. One of my favorite YA series was The Mortal Instruments and I was really excited to see the premier of the first movie, City of Bones. While it wasn't horrible (I actually enjoyed it), it didn't capture audiences and the rest of the films were canned before they even got started. Instead, the series was turned into a television series. I can't comment on that because I haven't seen in yet.

Most people read the books first. They are the ones so passionate about the movie. I have to admit that there are several book series that I only read because the movie got me interested. My oldest daughter was a huge Twilight fan. Read the books a jillion times. Went to the midnight premier of the first movie and rushed to buy it on DVD as soon as it came out. One weekend, I finally gave in to her begging and watched the movie with her. It wasn't a movie that blew me away, but it did get interested in the story. And since books are always better than the movie, I started reading. I finished the entire series in three days. And I admit, I was one who anxiously waited outside theaters for the midnight premier of the rest of the movies right along with my daughter.

Movies can reach people who would normally not pick up that book. Another example is Diana Gabaldon's Outlander series. Years ago I was at a writing conference in Phoenix where Ms. Gabaldon was the keynote speaker. Women were pushing past me to go get her autograph. I'd never heard of the series and asked someone what it was about. "Oh," she gushed. "This WW2 nurse travels back in time---" I tuned the rest out. Time travel? Not my thing. I'm not a sci-fi fan. At all. But I went to listen to the keynote. At this conference, she announced that Starz was producing the Outlander Series and they'd just cast the role of Jamie. As soon as the name Jamie passed her lips, the audience screamed. Women next to me were crying. CRYING. I went home thinking they must be the silliest people in the world.

Fast forward to almost a year later. Starz had a free movie weekend and the first show in the series just happened to be on. I was bored. There was nothing else on. I watched. And I got it. I was on the phone subscribing to the Starz network within the hour. I've since purchased all the books and watched all 3 seasons several times. And counting down the days until Droughtlander is over and season 4 begins. And now I'm pushing past people to get Ms. Gabaldon's autograph and crying whenever I hear the name Jamie. 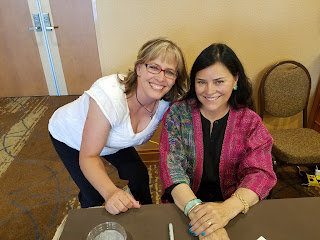 I became a fan of those books because I saw the movie first. Are books are always better than the movie? Of course they are! Books can get you deeper into the head of the character. You hear their thoughts. Feel their anguish. The ability of movies to do that is limited, yet still do an amazing job. In today's world, where instant gratification is so prevalent, maybe movies will turn people back into readers. I predict thousands of women will fall in love with the characters in the movie "Sweetest Heart" and flock to buy Catherine's SHORES OF INDIANA LAKE series. Maybe they'll fall so in love with Heartwarming books that they'll pick up more books. Who knows? The sky's the limit.

Don't forget to tune in to the Hallmark Channel today at 10am eastern for Catherine's guest appearance on Home and Family and March 17th for the premier of "Sweetest Heart"!

What about you? What are some of your favorite books that have made it to movies? Was it a hit or a flop?