A Vintage Dress for RWA Nationals...Maybe 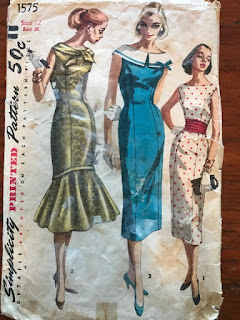 When my mom taught me to sew at the age of ten, I never dreamed that it would become a passion--mainly because I hated it so much. All those puckers and wobbly seams...it 'seamed' as if I'd never get the hang of it. But by the time I got to high school, thanks to my mother's perseverance, I was a decent seamstress and could make clothes that I couldn't afford. And I enjoyed the process--so much so that when something didn't work out, aka looked dumb on me, I felt the journey was worth it.

My new, as in a decade old, hobby is buying vintage patterns and making them into (hopefully) wearable clothing. Now the thing about vintage patterns--or any pattern that doesn't have a photograph on the cover, is that the finished garment may have the same lines as the drawing on the pattern front, but they never look the same unless you happen to be very thin and have disproportionately long legs. I am afflicted by neither condition. Heh.

Here are some of my previous sorties into vintage pattern land--these are all dresses that I wore to school or some event. 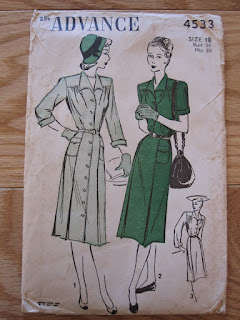 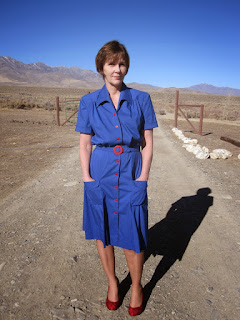 This dress is from the 1940's. I made it from poplin and used a vintage red belt buckle from that era. Kind of fun with red shoes. 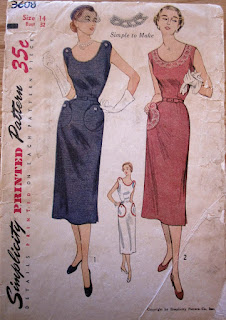 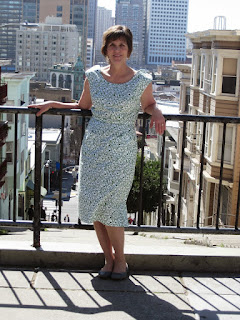 This is from the 1950s and is so comfortable. I really love this dress, and I don't feel costumey while wearing it. Fabric from WalMart. Saw it, had to have it. 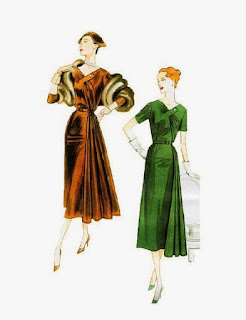 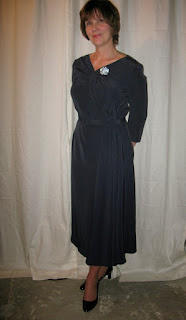 This dress was a lot of fun to make. It's from a reissue of a 1950s pattern. I don't generally like reissues, because they change the body proportions, but this one worked. 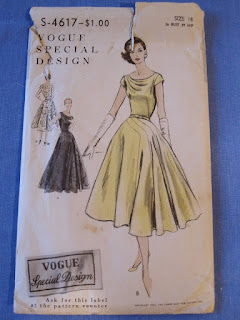 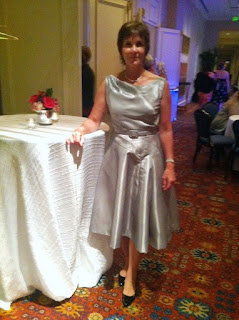 From the 1950s again. I was so lucky to get this pattern on eBay. It's very popular. The photo doesn't do the dress justice. This dress made me feel like a princess.

Some of my efforts, didn't go so well. I made this pattern--the version with the over skirt--out of blue satin and it looked so stupid that I didn't even take a photo of the finished product. Word of warning--if you're short and curvy, over skirts will make you look like an oompa loompa. 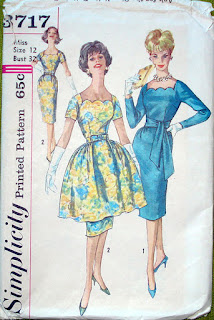 What this blog is boiling down to is that, after a long hiatus from vintage pattern sewing after I moved to Montana eighteen months ago, I'm at it again. I'm making a dress that may or may not make it to RWA Nationals for the Golden Heart luncheon--my daughter is a finalist!!!!--depending on the outcome. I wouldn't want to embarrass her, after all.

This is the pattern and the fabric. I'm making the mermaid version because...well, mermaid. 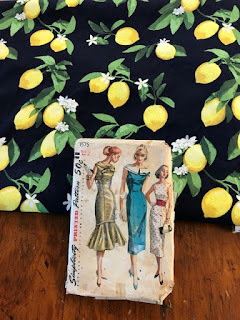 This is the size: 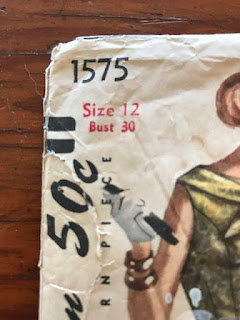 That is not my size. I'm grading the pattern up to my size, which I do by tracing the original, then cutting it into a grid and, after doing a little math, taping it back together again. Believe it or not, the process works very smoothly, and it's kind of relaxing as I listen to reruns of Monk. 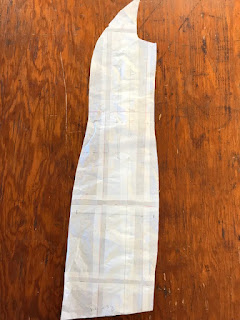 When I ordered the fabric, I thought the lemons would be smaller. They are not. However, I am moving forward. If the dress works out, I'll post a photo on my next blog. If it doesn't, well, we won't mention it again.