Adventures in Kittendom: The Terrible Two by Anna J Stewart

Posted by Anna J Stewart on February 06, 2019
If you are frequent readers of this blog, then you're familiar with my feline family members. A few months after losing our beloved Snickers, we bit the furry bullet and adopted two kitties, Sherlock and Rosie. We've had them six months now and I can honestly say...I may have overestimated my capacity for dealing with kittens, LOL. Don't get me wrong. I love them to death (ha!), but there have been times I've questioned my decision. All that said, they're fully grown now (I hope!) and as full of mischief and mayhem as they were the day we brought them home. Hey! Mischief and Mayhem. That's what I should have named them! 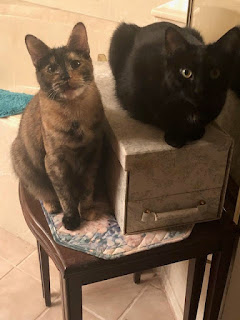 Yeah, yeah, I can hear you all now. Aren't they cute! Yes. They're little angels. Ha! No. They couldn't possibly do anything that would make Mom (aka me) want to pull her hair out. Or have me getting out of bed at 2 a.m. because someone (ahem, Rosie), discovered the forgotten set of wind chimes hanging in my closet. Seriously, how does she find this stuff? Did I mention they're fully grown now? And that they sound like a herd of stampeding wildebeests racing through the house? And that Rosie is most definitely my cat because she's as solid as a stone and heading to the chunky side. Especially when she lands on my chest at 4 a.m. to let me know that there's an empty space in her bowl (the bowl isn't empty, mind you, she's just eaten a hole in the food). 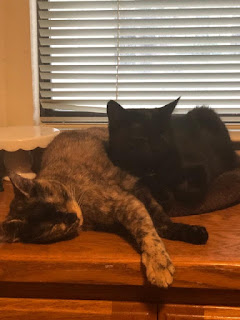 Now I'll admit, this is when they're at their most previous (cue Gollum wheeze here). Sleeping. Ah...silence. Rosie's meow echoes through the house while Sherlock barely squeaks. One of the perks is they entertain each other. The down side? They entertain each other with everything except the toys we've bought them. All my previous cats always broke the mold. Not these two. They are as one would expect kitties to be, tortitude and all. But moments like this, when they curl up together on the counter in the kitchen while I'm writing, and Rosie's purrs fill the room like a jet engine, there really isn't anything much better than that. Other than, perhaps, a full-night's sleep. 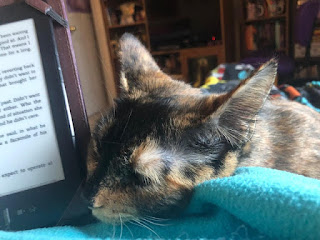 Unless you count having a reading buddy on a quiet Sunday afternoon. Moments like this I can forget all the frustration at wondering what that sound is or what they're getting in to now. Just a purring kitty snuggling on her (and mine) favorite blanket. 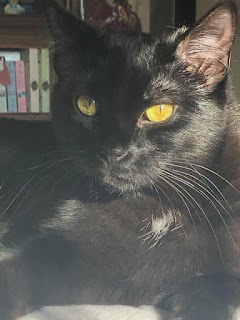 It is rare when Sherlock deigns to copy her sister to settle on my lap, but she did recently. She even stayed long enough for me to get photographic evidence. Ha! Take that anti-social creature. She's such a beautiful, sleek, QUIET cat, but I don't have any doubts she and Rosie are, in those more quiet times, silently plotting to take over the world. As they've already taken over the house, it's the next logical step.

Tell me about your fur babies--whether they purr or bark or...quack? Anyone have a duck? Anyone up for a play date? They'll get their exercise, I promise!  Until next time, Heartwarming fans. Have a great day!

USA Today and national bestselling hybrid author Anna J. Stewart writes sweet to sexy romance for Harlequin's Heartwarming and Romantic Suspense lines. Early obsessions with Star Wars, Star Trek, and Wonder Woman set her on the path to creating fun, funny, and family-centric romances with happily ever afters for her independent heroines. A former RWA Golden Heart nominee and 2018 Daphne DuMaurier finalist, Anna lives in Northern California where she deals with a serious Supernatural , Sherlock, and Jason Momoa addiction and surrounds herself with friends and family. When she's not writing, you can find her at fan conventions, at her local movie theater, or building her client list for her content editing services. You can read more about Anna and her books at www.authorannastewart.com. Her upcoming Heartwarming, HOLIDAY KISSES, the latest in her Butterfly Harbor series, will be released on April 1st.