SIT DOWN SATURDAY WITH CATHERINE LANIGAN 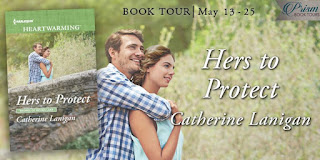 Welcome back to The Shores of Indian Lake series.  HERS TO PROTECT is number eleven in the series and by no means is this story “lost in the middle”.  In Family of His Own, I introduced the large Hawks family, kin to Isabelle, the artist, friend of Sarah, Maddie (of The Sweetest Heart on Hallmark—if you didn’t already know that) and all the Barzonni family. I knew the day I saw Isabelle setting the table and she kept putting out plates and more plates, that THIS family had stories. Lots of stories.

First of all there were three girls and three boys. Isabelle, the eldest, Sadie, who was finishing up law school, Violet, then in the Police Academy in Indianapolis; Dylan, a forensic accountant in Chicago, Ross, an attorney also in Chicago and Christopher a First Responder.

Violet, much like two of her older brothers couldn’t wait to leave “sleepy” Indian Lake for the big city. She doesn’t care which big city, New York, Chicago, LA---all would challenge her genius ability for detective work. She thinks.

Yep. She got turned down in all those places, and the only position as a rookie cop she can find---her home town.

Violet is on the verge of winning respect from Trent Davis, head of the Drug Task Force Team, landing a shot at a stakeout of a suspected drug lord, when she screws up. She sees a Bugatti Chiron racing down the country road, and she makes chase. The only problem is---the driver is not a drug dealer, but multi-millionaire, world famous Formula One driver, Josh Stevens.

From the minute she tickets him, Josh is furious. Then she arrests him and puts him behind bars. The flint of emotions against those iron bars, are fireworks between Violet and Josh.
I hope you like HERS TO PROTECT. I had so much fun seeing these two spar both on the race track and around Indian Lake. Their story is laced with intrigue and danger, but Violet proves she is up to the challenge.

“I’m telling you, Josh. This may have been fun for you, but it can cost us. If that cop has you on resisting arrest, that tells me you let your mouth run away with you. Again.”
“It wasn’t that bad,” Josh muttered.
“Yeah? Tell it to the judge. And believe me, you will. In the meantime, shut your trap. You got that?”
“Got it.”
“Good. Be as polite as you know how. I don’t know anything about this Indian Lake, but I’m going to find out. These little towns take small infractions seriously. It’s not Indianapolis where you can buy or autograph your way out of just about anything.”
“I’m seeing that.” Josh’s eyes tracked up to Violet. He watched the hard set to her jaw as she banged away at the computer. She scrolled the mouse over a section of writing and cut it. Then she licked her bottom lip and went back to work. The harsh light shone on her heart-shaped face, and he noticed the long dark lashes that cast shadows over naturally pink cheeks. She had expressive dark brows that pinched at the bridge of her pert nose when she found another section to cut. Until this moment, he hadn’t thought about what she must think of him besides the fact that he was a criminal. He was curious to know her thoughts. And that surprised him.
To Harry, he said, “So, how do I get out of here?”
“I can post the bail for you. Is there anyone there who can tell you how much?”
“Hold on.” Josh turned around, put his palm over the receiver and asked, “Officer Hawks, how much is my bail going to be?”
She stopped typing and pointed to a poster on the far wall. “Five hundred dollars.”
Josh went back to his call. “Five hundred.”
“Great. I’ll get in touch with the bail bondsman there in Indian Lake. Just chill. Make the best of your afternoon.”
“Easy for you to say,” Josh replied, and hung up. He handed the receiver to Violet. “You do realize this is costing me a lot more than a few hundred bucks.”
“How’s that?”
“I’m missing an interview with the South Bend Tribune’s sports writer. A radio program and television interview, as well. Interviews translate to tickets sold to the race. These things are important to me.”
“You shoulda thought of that earlier.”
“I was thinking…” His voice trailed off. “Oh, what do you care?”
She rose from her chair. “Until your bail is posted, I have to take you to a cell.”
“A jail cell? I can’t just stay here? Harry said it won’t take long to post bail.”
She cocked her head to the right, indicating a heavy metal door with a small wired-glass window. “Through there.”
“I don’t believe this. Sure you don’t want to put leg irons on me?”
“I can do that if you wish,” she bit out.
Josh remembered what Harry had said about being polite. “No. You’ve gone to enough trouble for me, Officer Hawks.”
They went to the hall that led to four jail cells. Officer Hawks spoke to the young officer just inside the hall. “Cell three has been assigned to…”
“Josh Stevens! Officer Trey McLaughlin. Glad to meet you,” he said, holding out his hand to Josh. “I’ve seen or heard nearly every race. How’s it lining up for the Indianapolis race?”
Josh shook his hand exuberantly. “You follow the races?”
“I do. I’m a huge fan.”
“Thanks, man.” Josh felt his grin grow. Two minutes ago he felt dirty. Now he felt whole again thanks to his fan. He would go back to his world, and his life would return to normal. It would. It had to. “Trey, I promise you, it’s looking great.”
Officer Hawks took Josh’s arm. “In here,” she barked.
Josh entered the cell, turned and put his hands on the bars. He was in jail. He’d fought all his young years to make the right choices, even when others lobbied with very persuasive skills for him to go down another road. The quick road. The road of drug deals and stunning amounts of cash. Hot cars. Expensive clothes. Tropical resorts where women would flock to him.
But Josh’s parents had taught him that his integrity was what mattered. With integrity and honesty, he would win respect of even his critics.
Right now he had to remember that.
As he looked through the iron bars at the startlingly and surprisingly compassionate green eyes of his captor, he couldn’t help wondering what it would take to win her respect.
With his gaze locked on hers, Josh said humbly, “Thank you, Officer Hawks.”

Join my Prism Book Tour www.prismbooktours.blogspot.com  May 13th to May 25th,  and visit my web site for updates on my next novel in The Shores of Indian Lake Series, HOME FOR CHRISTMAS, due out in November. I’m still working on more stories about Mrs. Beabots, Sarah, Maddie and the “tribe” so stay in touch with me on Facebook and @cathlanigan on Twitter!