Posted by Claire McEwen on March 27, 2020
"Don't make a writer angry, or they'll put you in a book and kill you off."
Have you seen those silly memes? Honestly, whenever I've seen something like that on the internet I've thought it was kind of mean. But that was before I moved to the California coast and started a garden.

The fine clay soil on my part of the coast was once an ancient seafloor. Now it is the pocket gopher's favorite building material. They thrive here, building vast networks of tunnels that run under roads and driveways, allowing them to pop up in any yard they please. And these tunnels hide them from predators like hawks and falcons, allowing their populations to soar.

Among many of the crimes that pocket gophers have perpetrated against me personally? Undermining my lawn until we couldn't walk on it without falling down into their collapsing tunnels. (We now have gravel there, that sits on two layers of strong chicken wire to keep the gophers away.) Eating almost every flower and vegetable I've ever planted. And even eating extremely large landscape plants! 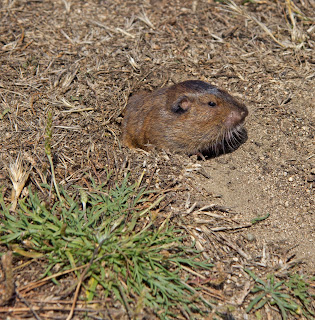 When we moved to this house by the Monterey Bay, I'd had experience with gophers in San Francisco. So I knew that I had to plant each plant in a chicken wire basket to protect its roots. I knew how to trap gophers, too. But I wasn't prepared for these gophers.

These gophers know how to dig all around a trap, so they spring it by the sheer weight of soil they've loaded on. Then they proceed on their merry, munching way, totally unscathed. These gophers tunnel all around and under the chicken wire baskets, weakening the plant so it is stunted and sad and then dies a slow death. And in the past year or so? These gophers have started leaving their tunnels and strolling casually across the garden to nibble on whatever they please!

"Just whack then with a shovel," my sister said when I told her. "That will kill them."
"I use a BB gun," said a parent at my son's school. "That takes care of them."
Bolstered by these tough statements, I resolved that the next time I saw a gopher above ground, I would take it out. Somehow.

So there I was, a couple days ago, watering the garden I'd just replanted after a gopher spent the winter decimating all of last year's plants. Suddenly, out of the soil popped a huge, fat gopher. It ran across the patio.

I'd promised myself I'd be tough this time. I'd told myself I wouldn't let a gopher ruin my garden again. I needed to do something about it. Now.

I squirted it with the hose. Which did nothing except send the poor creature running straight toward me in a blind panic. I shrieked for my husband. He came running, my son close behind.

Meanwhile, the gopher ran past me and stopped by the fence. It was frantic, digging for its life into some bare dirt it had previously piled there. The little critter was soaked and I could see pale skin beneath its matted fur. This animal I'd been so angry at for so long was terrified and pathetic. Any vague ideas I'd had about being tough and killing it melted away.

"Get a shovel," I commanded. "And a box."
"Are you going to kill it?" my son asked.
"I'm going to scoop it," I admitted. "And drive it out to the state park, where it can live happily ever after."

I tried to get it into the box, but the gopher, who quickly realized it was way more tough than me,  darted under the fence and disappeared into my neighbor's yard. Less than twenty-four hours later, it came back and destroyed the lavender I'd just planted a few days before.

Maybe I'll kill it next time I get the chance. Probably not, though. But at least I took my author's revenge. In my new book, Her Surprise Cowboy, gophers play an important role. They are food for the orphaned coyote pups that the staff at the Shelter Creek Wildlife Center are trying to save. The town's residents trap the gophers plaguing their gardens and bring them to the shelter for coyote meals.

So gophers, watch out. If you make this author angry, she'll put you in a book. And kill you! 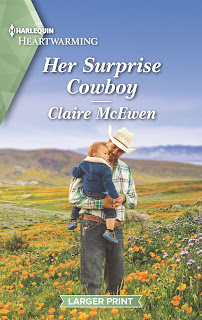 Her Surprise Cowboy releases everywhere April 1st and is already available on the Harlequin website. You can read what early readers are saying on Goodreads!