We had a farrier come out to our place some weeks back. We made an event of it, with my daughter and her friend driving in to help catch and wrangle the three horses, who before that were free-ranging it somewhere on a hundred and sixty acres or so. There was a lot of tromping around in mesquite brush, a lot of texting back and forth and searching hither and yon, but eventually all three horses were found and brought to the farrier’s truck. 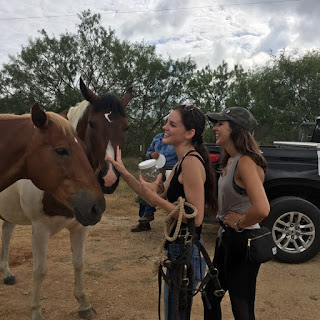 Once all the hooves were trimmed and treats were dispersed, we chatted with the farrier. He made a passing remark about “real cowboys.” My husband quickly said, “Oh, I’m not one of those.” The farrier laughed and said, “Yeah, neither am I.”

My husband grew up on the farm that’s been in his family since the mid-nineteenth century, had a pony as a child, and rode in cattle roundups a time or two. The farrier, whose line of work puts him in the way of a lot of horse owners and ranchers and such, said he personally knew exactly one real cowboy. Both of them were country enough to be precise with their terms.

My husband and I came to rural life—in his case, back to rural life—in a roundabout way. He left his small hometown after high school graduation and said he’d never live there again. But twenty years later, he was ready to move back home. And me? I grew up on a cul-de-sac, but I drew a lot of horses in my school notebooks and read a lot of Little House books. I was eager to learn.

Our progress wasn’t as steady as we’d have liked. Self-sufficiency doesn’t come cheap, and getting set up for it takes time and skill. Our desires exceeded our resources, especially early on, but we did what we could and hung in there. Often Greg wished he had his grandfather around again to tell him how to do things, but books and videos filled in the gap. You can learn virtually anything from YouTube, from rough carpentry to tool maintenance to goat castration.

A few years back, Greg built a splendid chicken coop in what we grandly called the orchard because we expected to plant fruit trees there someday. I think his grandfather would be proud of how the vintage door and windows salvaged from an old house—though also shocked by the cost of the new cedar siding, and by Greg’s tendency to wear Birkenstocks when he goes out to check chickens. 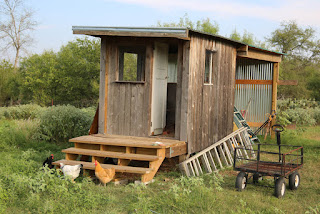 The actual chickens are a recent addition. While the coop was being constructed, a red-tailed hawk started keeping watch from a nearby fencepost with unnerving prescience, no doubt aware that chicken coops usually contained chickens. He gave up on us once our coop had sat vacant a year or so.

In the early days of COVID lockdown, I did a lot of pressure canning, sewing, furniture repair, and writing. Greg built new porch steps, planted that orchard, and brought home six baby chicks—two Jersey Giants, two Buff Orpingtons, and two Brahmas. The hens are mostly grown now and laying well. We consistently get three eggs a day and have had two five-egg days. We can tell when a new egg has been laid because of all the celebratory squawking on the coop porch. More recently, we acquired a rooster of uncertain heritage (mother was a Plymouth Rock, father was “from down the road”). He is of a mild disposition, shy of the hens, and seems to lack confidence in his crowing, but he is coming along. 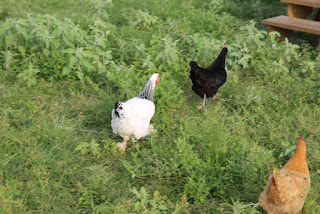 The novels in my Truly Texas series are set in a small rural town much like the one where we live. The characters have varying amounts of country “cred.” Some, like my husband, grew up in the country, swore off farm life, and later had a change of heart. Some wanted to stay in the country all along but faced obstacles like rising land prices and lack of capital. Some didn’t grow up in the country and never wanted or expected to live there…until they did. But they all come to love rural life in the end, and find a way to make it happen. They probably sneak an occasional look at a YouTube video to brush up on their goat castration skills, as I do.

After nearly a dozen years on the farm, we’re starting to feel like we’re making real progress. We’ve had some good and not-so-good garden years, some disappointments and unexpected successes. Just now, we’ve got a ginormous volunteer pumpkin vine spilling out of the compost heap, looking a lot like the overly aggressive plant in The Great Green Turkey Creek Monster that almost takes over a town and can only be held in check by trombone music. I’ve counted eight good-sized pumpkins under the huge spreading leaves. Come fall, Greg will take most of them to the farmers’ market at the tiny downtown where we pick up our mail. Maybe he’ll give one to the tavern employee who’s been gifting us with summer squash and cucumbers.

I may not have the bona fides of someone who grew up country, but coming to it later in life gives me a perspective I might not have had otherwise. Part of that perspective is knowing I’m blessed beyond measure to live where I do. 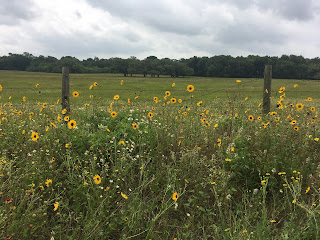