Sit Down Sunday with Claire McEwen

We usually call this post Sit Down Saturday, but today it's Sit Down Sunday because Saturday ran away from me! In fact the whole week did. It was one of those weeks where I was constantly saying, "How can it be ________ o'clock already?"

Is that happening to you as well? I find that time runs on a convoluted path during this pandemic. 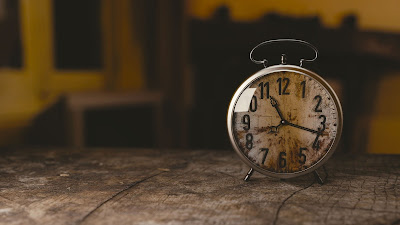 Speaking of time, when I started writing my new book, Rescuing the Rancher, I was really worried about how I was going to manage the timeline of the story.  I planned to set most of the book in less than twenty-four hours, during a wildfire. I'd never written a book like that before and I was very intimidated. What were my hero (Aidan Bell, a rancher) and my heroine (Jade Carson, a firefighter) going to talk about when they were alone for all that time? How was I going to show what they were thinking without endless passages of inner monologue, if there were no secondary characters for them to bounce ideas off? 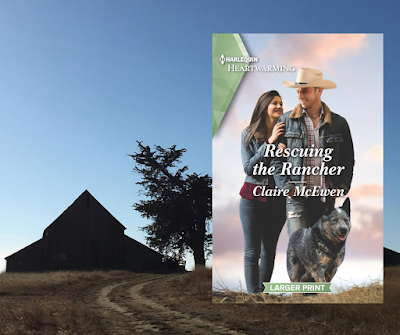 By the way, in case you are new to 'writer speak', inner monologue is when characters think to themselves about things. Here is an example: In Rescuing the Rancher, the hero, Aidan Bell, loses his hat when the wind blows it off his head and it lands in a mud puddle.

"Darn wind,” he muttered and ran to retrieve it, shaking out the battered straw. He’d had this hat for years. Sheila had given it to him when they first bought the ranch. Said it made him a real rancher, and not just a city boy anymore. Though with everything that happened to them after that, maybe drowning by way of manure water was an appropriate ending for the dingy old thing. He had to go into town later, maybe he could grab a new one at Coast Feed and Supply.

Aidan hung the dripping, stinking hat on a nail on the barn wall and went back outside. Instantly the wind lifted his hair on end with dry, crackling fingers. The Diablo winds only showed up in fall. Diablo meant devil in Spanish, a fitting name for a wind that sucked in heat from California’s Central Valley and blasted it out over the coastal hills. It was like standing too close to an open oven.

Notice that he's by himself, thinking, with no one to talk to. Inner Monologue.

Well, as it turned out, there is a fair amount of inner monologue in the book. But thankfully, I was able to surround it with so much action that it kept things from getting bogged down. Getting trapped on Aidan's ranch, fighting an enormous wildfire, kept Jade and Aidan pretty busy! They not only had to survive, but they were trying to save the livestock that were stuck on the ranch with them. Plus they had to look after a cat named Elliott, a dog named Chip and two kittens. And poor Aidan had to face his tragic past and try to let it go, all while running around trying to divert the wildfire around his property!

And wow, did Aidan and Jade have a lot to say to each other. There I was, worried that I wouldn't be able to think of things for them to talk about, but they talked though that entire fire! Here is an example of them chatting away. Jade is taking care of Elliott, a rescued cat, before she and Aidan drive up out to the edge of the property to try to fight the fire.

Jade set the food bowl inside the tack room and went to get poor Elliott. Inside the tack room, the terrified cat cowered in the back of the carrier when Jade opened the little metal door. She took out his water bowl and set it on the floor. “Hey, buddy. Want to come out to eat and drink?” Elliott just stared at her, his big, green eyes unblinking.

“Jade,” Aidan called from outside the tack room door. “Ready to go up to the house?”

“Coming,” she called back. “Good luck, Elliott,” she told the cat. “I’ll try to come back and check on you. And I’ll get you out of here if the barn is in danger of catching fire. I promise.”

When she exited the tack room, Aidan was looking at her with an amused expression, crinkling unfamiliar lines around his eyes. “Did you have a good talk with Elliott?”

She couldn’t help but smile. Busted chatting with a cat. “It was lovely, thank you. Did you have a nice conversation with Payday?”

“Your secret is out. You’re sweet with your horse.”

He shook his head. “Just trying to calm him down, that’s all.”

“Yes, I’m sure that’s all it was,” Jade teased. This would have almost been fun, except when they left the barn Jade could hear the fire more clearly. It was a rumbling roar that couldn’t be missed now.

Aidan turned to her with alarm in his eyes. “Is that sound what I think it is?”

“It’s the fire,” Jade said. “When it gets here it will be really, really loud.”

“It only took a moment for Aidan’s expression to fall back into its usual calm appearance. “Not looking forward to that,” he said, and motioned toward the ATV. “Ladies first.”

Jade rolled her eyes. “So chivalrous.”

He must have enjoyed her sarcasm because he smiled for a brief instant. “You’ve got ash all over your hair,” he said. “You’re going gray.”

She automatically ran her fingers through her hair and realized how gritty it was. “Yuck.” She peered more closely at him. “It doesn’t show up as much on your blond, but yeah, you’re gray, as well.”

“Nothing like a deadly fire to cause premature aging.”

Jade stared at him in disbelief. “Did you just make an actual joke?”

He smiled then, and it softened his harsh features, turning him suddenly and shockingly handsome. He got on the ATV, sat down in front of her and started up the engine. “We better get going. We don’t have much time.”

Rather than being difficult to write, as I originally assumed, Rescuing the Rancher was so much fun and kept me on the edge of the seat the entire time I was writing it. And if you check out Goodreads, I'm proud to say that it's keeping readers on the edge of their seats, too!

Have a wonderful Sunday, you all!  I hope you enjoyed this little peek into Rescuing the Rancher! 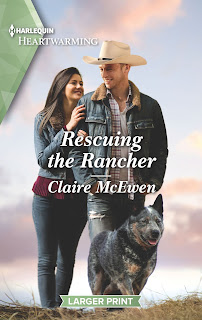