Sometimes people ask authors, “Where do you get your ideas?”  Most of the time, we don’t know. But for my next book, AN ALASKAN FAMILY CHRISTMAS, I do know, or at least I know how I came up with the setting. Warning: Vacation photos included, but no slide shows, I promise. 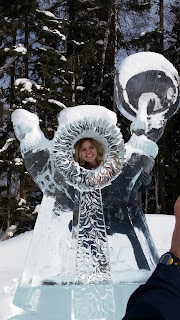 In March, 2018, my daughter brought her boyfriend (who has since become her husband) to visit us in Alaska, and we all flew to Fairbanks for the weekend. We walked through Pioneer Park and toured the amazing creations at the World Ice Carving Championships. And then we boarded the train to Anchorage. It followed the highway for a while and went through the station at Denali National Park, but eventually the rails parted from the road and we saw a part of Alaska we’d never seen before. And along the way, we discovered that people had built cabins that were only accessible by railroad. The Alaska railroad allows people to flag the train and it will stop and pick them up. And I knew I had to set a story in one of those backcountry cabins I never knew about.

Natalie, the heroine of this story, doesn’t know about them either. At least not until she gets herself stranded in the middle of nowhere with the next train not scheduled for several days. Good thing Tanner is there to offer her a place to stay. And so much more.

And now for those photos: