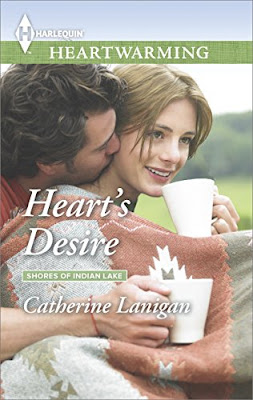 To say I’m thrilled about my book, HEART'S DESIRE, being made into a movie is an understatement. I’m blessed and so very appreciative to all the people who have worked for over four long and arduous years to make this happen. In the movies, the heroine (me) would get a phone call and someone (the publisher) would announce that Hallmark just bought my book. That’s the dream scenario. That’s not what happened.

The behind the scenes story, like most things in life, was bittersweet. My late husband, Jed Nolan, was a film producer, which some of you may or may not know. For nearly 15 years we worked seven days a week writing, re-writing, pitching studios, television networks, cable networks, talking to agents, managers, stars, other producers. You name it. I felt I’d walked over every inch of asphalt in Hollywood. We never got a bite. Oh, we had several accolades. Quite a few production companies we partnered with and wrote, long, long, legal and expensive contracts with ended up stabbing us in the back.

But we never gave up.

In 2005 we met two award-winning ladies who owned a small production company. They read my book, “Christmas Star” and never forgot it. When my Shores of Indian Lake series was published by Heartwarming, I sent them the first two books, LOVE SHADOWS and HEART’S DESIRE. They loved them and because they were shooting another Hallmark movie at the time, they believed the books were perfect for Hallmark. They pitched the stories. The Executive said she’d read them. Time went by, I wrote three more books. Then the Executive read those. SHE fell in love with them. She asked the rest of their very understaffed staff to read the books. They did and they loved them. Another year passed. Two and half years ago, Jed and I met with our Production Executive. He told us how perfect the stories were for them. Jed turned to me and said, “Did the Hallmark Production Executive just pitch us OUR series?” 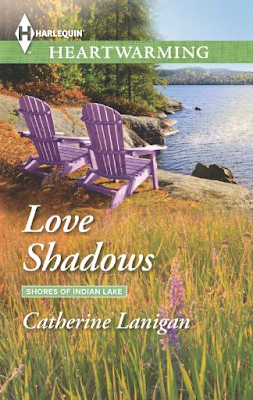 We had delay after delay. In the process of all this, Jed became very ill and died. Jed made me promise that I would never give up on his dream for me—to get my Heartwarming books to television. I promised him and kept at it. After all, I actually do believe that deathbed promises are sacred. In addition, this promise is important to the rest of the story I’m going to tell.

A year later, I signed the contract with my production company and Hallmark.

Then there was a writer’s strike in LA. The production that was slated for last June got pushed to November. Then December. Now, it’s the end of January, but it’s finally happening. On January 29th, I’ll be flying to Vancouver and I’ll be on the set, having promotional photographs taken. I’ll be staying in the motel with all the cast and crew. For me, it will be somewhat like the film shoots I visited when Jed was producer and/or director. It’s a lot of fun, but seriously, between us, I was always looking around for my laptop so I could get some pages written. I know, is that nutty or what?

Every day there is something new and exciting that has happened, besides changing my flights! And all of it is wonderful.


But here is the story within the story. For two plus years I have put one foot in front of the other hoping to make good on my promise to Jed. I have asked the producers to dedicate the film, “In Memory of Jed Nolan”. They’ve said they will do this on the end scroll. Whether it makes it past the cutting room or not, is in God’s hands. But I’ll be fighting for it all the way.

I have to back up a bit. Years before Jed died, he and I built a storage shed in the back yard. There was a five drawer file cabinet that we put all his film files and old PR photos about him. This was his “space”. There were three 8x 10 photos of him when he was 19-22 years old that he used for acting gigs or modeling assignments. When he died I went through every single file in that cabinet looking for those photos. I wanted to put them in the Memorial Pamphlet I gave to our friends. For the life of me, I never found them. Since that time, every time I would go to the shed, I would rifle through the files looking for those photos.

Last week, I got a spectacular call from the producers. I’m not allowed to disclose the content of that call, but let me say, I was dancing around the room. The best news I’ve heard in a long time. I thanked God, Jesus and told Jed I knew he was around me and he was helping to make this happen. I asked him if he would send me a sign to let me know that I was right and had fulfilled my promise.

My friend came over to help me put the decoration bins in the shed. While she went back for another load, I stood in the shed next to the file drawers and thought, “I’m going to open this drawer and those photos will be right there.” I yanked open the drawer and a file wafted open revealing all three photos. Right where they should have been, but had not been for years. I burst into tears and laughed with joy. 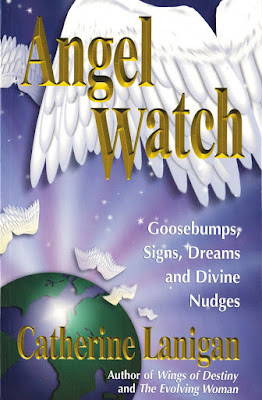 I’m still keeping my promise, Jed. I will never give up.

Some of you may remember that HEART'S DESIRE was featured on the USA TODAY HEA blog with an in depth interview when it released in 2014. That interview revealed a lot about my writing journey, including my days on set with Kathleen Turner and Michael Douglas for Romancing the Stone. You can read the interview HERE if you missed it!

Please join me on my Prism Book Tour for Heart’s Desire. The movie air date is March 17th, St. Patrick’s Day, which is the beginning of their SPRING FLING promotion. There will be lots of ads about our first Heartwarming book made into a film. In fact, not only did I have the chance to visit the set recently (see photo above with my agent on set), I was also interviewed for The Hallmark Channel. Here are some 'behind the scenes' photos from my experience on set: 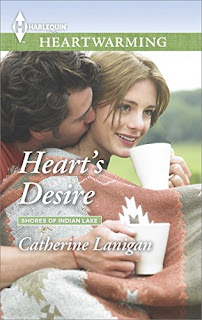 His homecoming is bittersweet…for both of them
Café owner Maddie Strong is finally ready to take her burgeoning cupcake business to the next level. With the help of handsome businessman Alex Perkins, her future's all mapped out. Until her first love comes home.
At seventeen, Maddie adored Nate Barzonni with her whole heart and soul. But when he asked her to elope, she'd said no—she couldn't let him throw away his dream of becoming a doctor. Then he vanished from her life for eleven years. Now the cardiac surgeon has returned to Indian Lake asking for a second chance, and Maddie has to choose between her new life…and the man she never stopped loving.

Catherine Lanigan is the international bestselling and award-winning author of over forty-five published titles in both fiction and non-fiction, including the novelizations of Romancing the Stone and The Jewel of the Nile. Ms. Lanigan’s novels have been translated into over twenty-four languages. Lanigan was tasked by the NotMYkid foundation to pen a collection of compelling and informative true stories of teen addicts. Ms. Lanigan’s SHORES OF INDIAN LAKE series for HARLEQUIN HEARTWARMING includes LOVE SHADOWS, HEART’S DESIRE , A FINE YEAR FOR LOVE, KATIA’S PROMISE, FEAR OF FALLING, SOPHIE’S PATH, PROTECTING THE SINGLE MOM, FAMILY OF HIS OWN, HIS BABY DILEMMA, TOO CLOSE TO THE FIRE (2018) and MY RACING HEART (2019).

Ms. Lanigan is a frequent speaker at literary functions and book conventions as well as inspiring audiences with her real stories of angelic intervention from her Angel Tales series of books. She is an outspoken advocate for domestic violence and abuse and was honored by The National Domestic Violence Hotline in Washington, D.C. She has been a guest on numerous radio programs including “Coast to Coast” and on television interview and talk show programs as well as blogs, podcasts and online radio interview programs. She writes a monthly blog for Heartwarmingauthors.blogspot.com. Visit her at www.catherinelanigan.com, on Facebook, LinkedIn, Twitter@cathlanigan.com, Pinterest, Goodreads and Google+.

You can find Heart's Desire and all of Catherine's books on Amazon or at your favorite online bookstore. You can also find her on Harlequin.com.